skip to main | skip to sidebar

I looked through my stash this morning, searching for a project to start off the new year right. This year has just got to be better. I found a few possibilities. 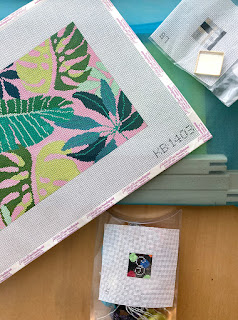 The large canvas is Kirk and Bradley's Tropical Leaves Clutch (which I'll probably have finished as a pillow). I've had it all kitted up, including stretcher bars, for some time. I'm not sure what it is that drew me to this, certainly not the pink background, but I find the other colors and the shapes very appealing. I think it's time to place the first stitches into a bright, cheerful design that will chase away the clouds from 2020. (I hope.)

The two smaller canvases are from Point2Pointe and would be very quick finishes. If I want, I could even finish them myself. I may do these little quickies today (not the finishing) just to feel like I've accomplished something. I have threads for the one with my initial, and I can easily find threads for the silver and black geometric. We'll see.

I joined in the 2020 challenge of completing the stitching of 20 pieces. I didn't get close, but I'm happy with what I did get accomplished. 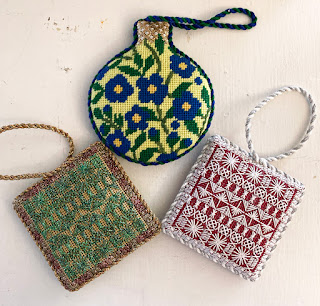 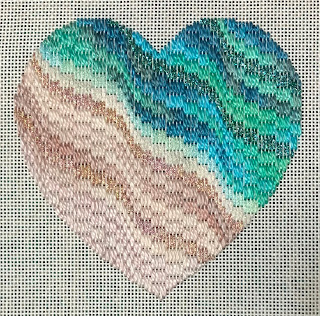 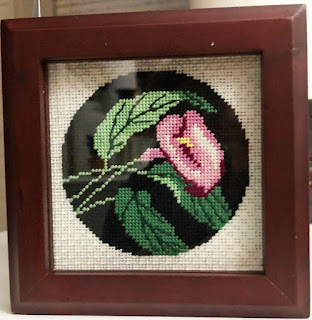 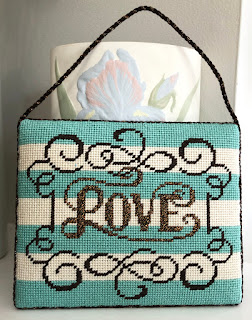 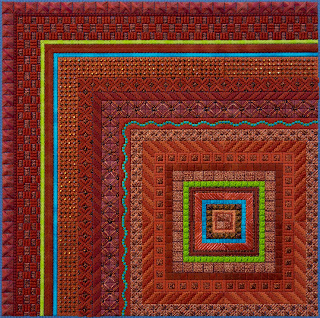 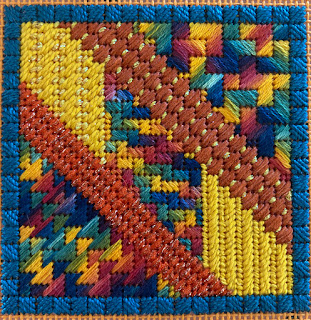 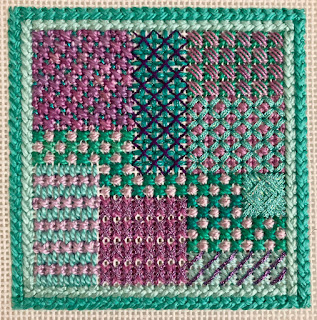 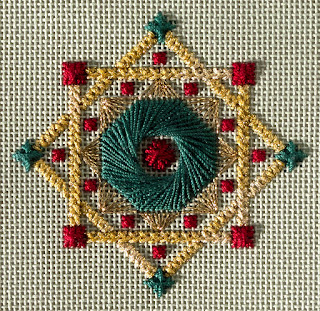 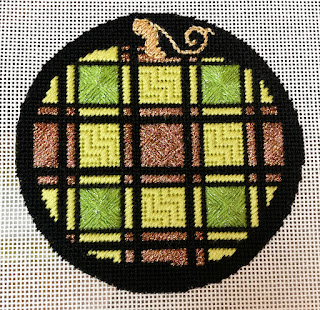 How I Spent My Corona Summer

Like many people, I now spend my days alone, since I live by myself and am of a certain age, the "vulnerable" age. I left my part-time job in a retail needlepoint supplies shop just as my area started closing down to try to control the spread of COVID-19. I was supposed to go back to work later in the summer, when things had settled down, and we all know how that's worked out. How have I filled my days?

The first month or so were spent finishing WIPs or doing quick pieces. Then in early May I was approached to pilot stitch a project that would be published in Needle Pointers, the magazine of the American Needlepoint Guild, at the end of 2020 or beginning of 2021. The designer was a friend whose designs I had charted for a while, the person writing the instructions and creating the charts and diagrams was a guild friend (she also was the one who approached me), and I was intrigued by the deceptively (it turns out) simple design. So I said yes!

Let me say, the individual stitches and threads were straightforward. For the designer, it was a relatively simple and straightforward design. I, however, had trouble with the stitching for most of the time. It was like I'd never stitched anything other than basketweave, which is so far from reality. Needless to say, I have chosen to blame all my difficulties on the pandemic. Focus, concentration, almost everything required for something that is being charted while one is stitching was so difficult! Add in my perfectionist nature and the knowledge that it would be published in a national magazine and you can see the problem. Every stitch needed to be as close to perfection as I could get it. Gah!

Having said that, I think the project is beautiful! The combination of the threads and stitches in a primarily monochromatic palette is wonderful. And now that it has been officially published (albeit just the digital version at present), I can reveal all.

Behold in all its glory, "Asymmetrical Copper" by Jeff Kulick, charting and instructions by Marilyn Owen, beading completed by Donna LaBranche (because I don't do beads). 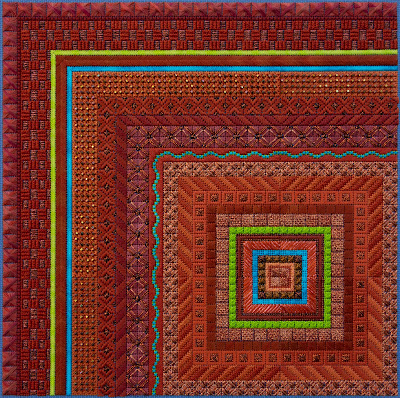 If you are a member of the American Needlepoint Guild, you have access now to the digital version of Needle Pointers on the ANG website. The printed magazine should arrive in your mailbox sometime between mid-November and early December.

I highly recommend this as a group project for chapters. I think the colorway can be customized, keeping in mind that one needs two colors (the green and blue here) that sharply contrast with the primary color to make it work. It can be a stitch-along, a special workshop, or a multi-part meeting program. Thanks to virtual meetings, anything is possible.

Leftovers From 2019 and a Sneak Peek

I realized the other day that in my frenzy to post everything I've worked on in the past several years, I completely forgot about a couple of very important items and other random stuff.

First, my daughter got married in July 2019 (so glad it wasn't this year). I stitched a couple of things for her and her new husband. 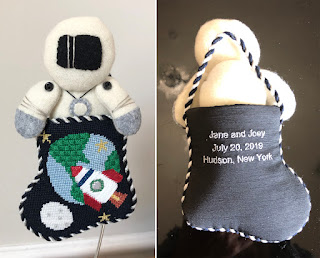 The wedding coincided with the 50th anniversary of the space walk, so I couldn't resist stitching this Kathy Schenkel mini-sock with the spaceman insert. I changed the planet in the lower left to a moon, so it was perfect. The finisher had the important details embroidered on the back for me. The happy couple loved it! 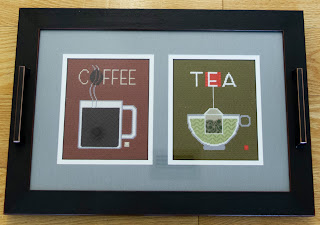 As a wedding gift, I stitched these two companion pieces (he's coffee; she's tea) and had my wonderful framer, Total Framing, make a tray with them. It turned out just as I had pictured it. They loved this too.

In 2019 I created a bargello insert for a fabulous Lee's self-finishing handbag that I picked up at a trunk show at Waste Knot Needlepoint. I use it all the time. 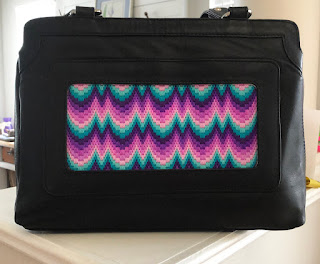 I also stitched a bookmark that needs finishing. I have another of the same design still awaiting finishing.

So what have I been working on while living in isolation for most of the past year? The main project took several of those months, and I can only give you a sneak peek at it. I pilot stitched a new design by Jeff Kulick for the November/December issue of the American Needlepoint Guild's Needle Pointers magazine. Here are some snippets for you to wonder about till it's off press (soon, soon). 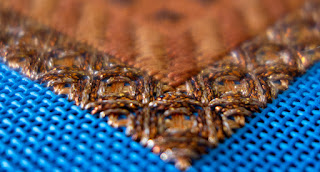 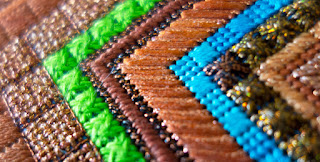 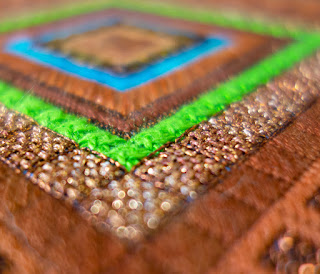 After I finished this monstrosity (beautiful but large!), I needed to work on something smaller, quicker. During the summer ANG offered what they called "Holed Up Minis," small designs that could be stitched with one's stash, with charts and minimal instructions. My local chapter, Potomac Chapter of ANG, used three as a virtual meeting program in September. They were all designed by one of our members, Marilyn Owen, and were related mini samplers. I started with the Diagonal Stitches Sampler at the meeting, then proceeded to the Cross Stitches Sampler once I had finished it. I used both as an opportunity to play with threads from my stash. I think I made the second one more difficult for myself by deciding to use two different thread types for each stitch. I guess I was thinking, "How hard can it be?" 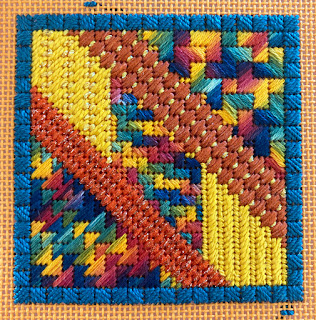 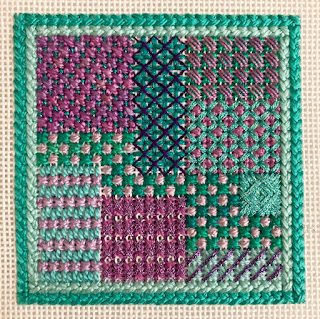 So I guess you can see that I've been keeping myself busy.